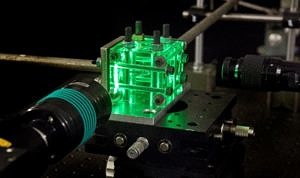 This work package includes crucial activities of the project in terms of methodologies and materials development.

To design the initial surface structure, a detailed literature review was carried out focusing on vortex generation and heat transfer enhancement [1, 2, 3, 4]. The surface structure introduces mixing in the thermal boundary layer and thereby increases the heat transfer by forced convection. However, increased roughness increases the flow resistance and thus the required pumping power, which is an important design parameter to be minimized. Li et al. [1] reported that the best heat transfer enhancement for a given pumping power is reached when the structure height is about three times the viscous sublayer thickness. Mondal et al. [2] offered a good reference for vortex generator geometries in BMTS as the examined flow passage geometries are similar to ours. Wu and Tao reported that [3] the optimum angle of attack of 45⁰ for the vortex generators. Esmaeilzadeh et al. [4] compared simple, curved and trapezoidal vortex generators and show that curved vortex generators have a lower flow resistance. 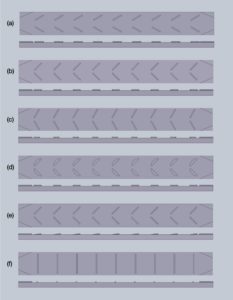 The reported designs of the surface structures in the literature lack extensive optimization of relevant design parameters for the best performance. Moreover, the viscoelastic properties of the coolants and their effect on the forced convective heat transfer are not addressed yet. A numerical optimization framework is being developed to provide guidelines for designing surface structures appropriate for maximizing the heat transfer performance with viscoelastic fluids.

The optimization framework is based on 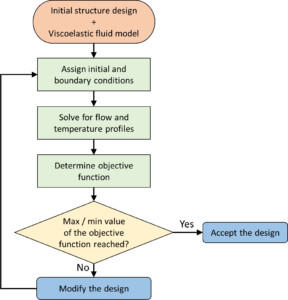 Formulate the necessary SGS for the simulation of the flow and heat-transfer processes of viscoelastic media, accounting for the effects of elastic forces and shear thinning.

Main objective is to develop modelling approaches suitable for describing the rheological and thermal behaviour of the working media.

Main objective is to develop modelling approaches suitable for describing the rheological and thermal behaviour of the working media. 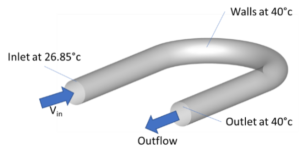 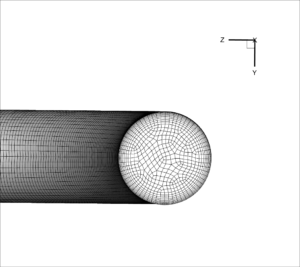 For shear thinning fluids , the following  relationships is used: 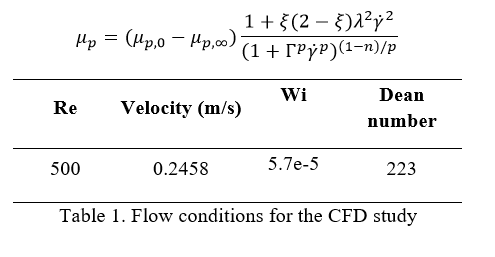 Referring to Figure 4. The shear-thinning fluid resembles the Newtonian fluid temperature profile, with a hot spot in the middle of the pipe. In the viscoelastic fluids as the secondary flow is supressed, the internal temperature field appears later than the other two fluids. However, after the 45° plane, it becomes visible that the thermal boundary layer thickness in the high viscosity fluid is increased and the temperature in the last slice (180°) appears to be higher than the other fluids.

Figure 4. Temperature and vorticity profiles in the channel cross sections

Figure 5. Average temperature in the slice (left) and wall heat flux (right) along the channel

Main objective is to couple SGS model with CFD flow solver and validate the findings against experimental data. Simulation of the viscoelastic fluids and Nano- Fluids are carried out at engineering scale.

Phan-Thaien & Tanner (PTT) model has been implemented in a pressure-based solver and is thoroughly investigated in terms of numerical stability, numerical accuracy and convergence. The PTT model introduces 3 source terms in the momentum equations and 6 viscoelastic stress components to account for non-Newtonian fluid flow. By solving the momentum equations with the source terms and 6 more equations for the additional quantities, the evolution of viscoelastic effects is obtained.

Fig. 6 Schematic of the flow configuration for the benchmark case for Non-Newtonian fluid over a cylinder Wi =0.85

Weissenberg Number: Wi is defined as the product of the shear rate γ̇ and the relaxation time λ and is a measure of comparison of the elastic forces over the viscous forces. The domain length is equal to 30 cm and the height is equal to 2 cm. The radius of the cylinder, RC, is equal to 1 cm and the Reynolds, Re, number based on RC is equal to

Furthermore, progress has also been made regarding numerical simulations of non-Newtonian fluids based on experimental properties provided by the project’s industrial partner (Lubrizol). The simulations incorporate non-Newtonian fluids designed by Lubrizol with specific properties to enhance heat transfer and contribute in the overall BTMS design.